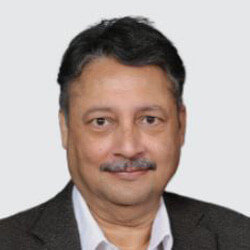 Mr. N. Srinath, born in 1962, has a degree in Mechanical Engineering from IIT (Chennai) and a Management Degree from IIM (Kolkata), specialising in Marketing and Systems.

Since joining the Tata Administrative Services in 1986, Mr. Srinath has held positions in Project Management, Sales & Marketing, and Management in different Tata companies in the ICT sector over the last 33 years.

On completing his probation with the TAS in 1987, Mr. Srinath joined Tata Honeywell, a start-up in the business of process control systems, as Project Executive working till late 1988 on securing various statutory approvals and funding necessary for the project. He then moved to Tata Industries as Executive Assistant to the Chairman, an assignment he handled till March 1992. In that period, he was also part of the team that set up Tata Information Systems (later Tata IBM). From June 1992 to February 1998 he handled a number of assignments in Tata Information Systems Limited in Sales & Marketing to enterprise customers in the banking, retail, petroleum and process manufacturing sectors.

In March 1998, Mr. Srinath returned to Tata Industries as General Manager (Projects) responsible for overseeing the project implementation of Tata Teleservices fixed line telecom service in the state of Andhra Pradesh. In April 1999, he took over as the Chief Operating Officer of Tata Teleservices responsible for Sales, Customer Service, Networks and Information Technology. From late 2000 till February 2002, he was the Chief Executive Officer of Tata Internet Services, a start-up Internet services business serving retail and enterprise customers.

Mr. Srinath has received several recognitions in the telecom industry. He was named the 'Telecom CEO of the Year' in Asia by the leading publishing group Telecom Asia in the 2006 edition of their awards. The Institute of Economic Studies (IES), a research oriented organisation, conferred its Udyog Rattan Award on Mr. Srinath in November 2006. In 2008 and 2009, Mr. Srinath was named as the world's eighth most influential telecom personality by the Global Telecoms Business magazine as well as the 'Telecom Person of the Year' by the India-based Voice and Data magazine in 2008.

Mr. Srinath has joined as CEO of Tata Trusts with effect from April 1, 2020.